7-year-old applies to Google – and the boss responds

A touching story from the web: Seven-year-old British girl Chloe Bridgewater applied for a job at Google with a handwritten letter. And received a reply from Google CEO Sundar Pichai.

Often, even young children have clear ideas about what they want to be when they grow up. This was the case for a little girl in 2017, who even went so far as to write a letter to the Google CEO himself, asking for a job.

Probably the cutest letter to Google

Chloe Bridgewater is from Hereford, UK, and was only seven years old when she wrote the letter to Google. In the letter, she made it clear that one day her dream job would be waiting there. It probably took some help from her parents to write it, but the response still comes as a surprise to the family. Sundar Pichai, CEO of Google, responded personally to Chloe’s letter.

Motivated by her father, the seven-year-old formulated a detailed paper. There she explained her interest in computers and that she wanted to swim in the Olympics one day. Here is the full letter, which the BBC published: 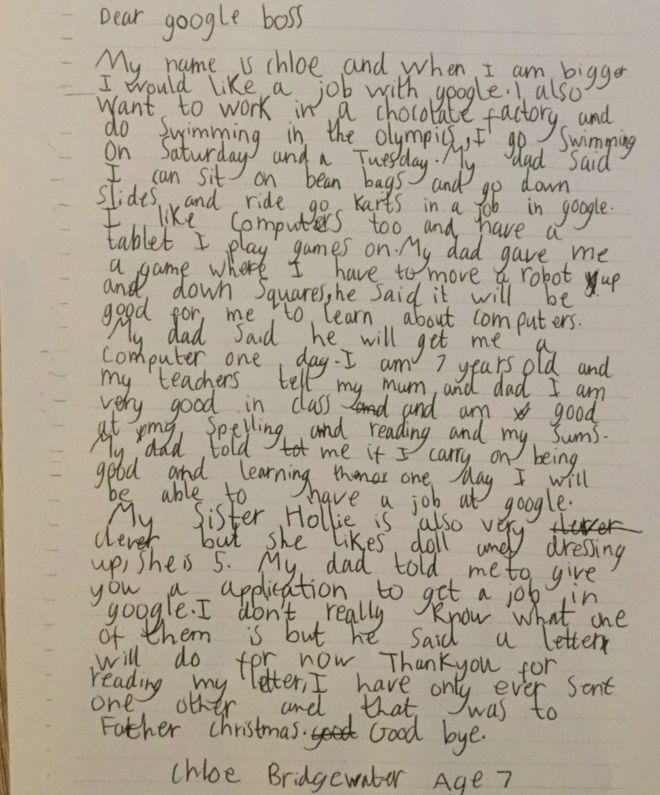 Previously, Chloe had written only one letter to Santa Claus in her life. Sundar Pichai was obviously very touched and therefore replied personally. He motivated her to continue to believe in and pursue her goals. “If you follow your dreams, you can achieve anything – from a job at Google to swimming in the Olympics,” the Google boss said. He said he’s already looking forward to Chloe’s reapplication once she’s done with school.

Chloe’s father posted the letter from Google on LinkedIn . He said his daughter was thrilled to have received a response personally signed by Pichai. He said she now wants to work even harder in school so she can work for Google later. “I can’t thank such a busy person enough for taking the time to bring a little girl one step closer to her dream,” the father said. Speaking to BBC, he commented, “We were gobsmacked. But I don’t think Chloe understands the magnitude of that reaction.”

2021 year also gave a small update from Chloe. Four years after the letter, Chloe still holds on to her dream of working at Google when she grows up. Alternatively, she said, she wants to play professional soccer for England.

Sony unveils camera smartphone with huge one-inch sensor
First iPhone with USB-C port is now on sale
Do not charge your smartphone at night in bed!
The 8 best outdoor smartphones in comparison
Tags:Google
previousWhat exactly are algorithms?
nextNasty scam circulates on WhatsApp for Father’s Day